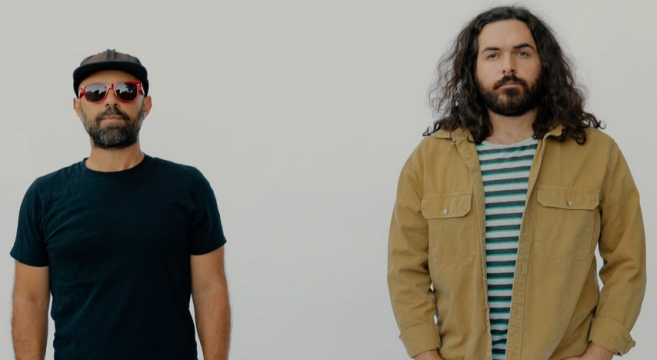 Asbury Park’s beloved band Yawn Mower had one heck of a 2022. They released an amazing array of new videos, went out on the road for the first time and dropped their outstanding debut full length LP To Each Their Own Coat. The album is full of big ideas and bigger sounds. The duo of Mike Chick and Biff Swenson enlisted help to bring this amped level of noise on the stage. Which brings us to Yawn Mower’s best albums of 2022. – Ed

Yawn Mower (YM) expanded their lineup this year and with that came a whole new slew of “best of” recommendations. The following are our favorite albums and songs from 2022. Hop over to Spotify and check out our year end playlist. It’s gloriously all over the map!

The first single hit right. Then the second single. Then the entire record. Love when that happens. Fave record of the year.

Wet Leg’s debut LP is the logical successor to The Breeders’ Last Splash for me. Stuck on an island with one record allowed level.

Heavy Neil Young and Built to Spill vibes, but through a fuzzier lens. “Tastes Just Like It Costs” is an anthem. Big fan.

An older song of theirs came on a Spotify mix while I was painting the railing of my porch this Summer. Instant add to playlist status.

“Postman” has a beat that will have you dancing in the isle of your local supermarket. That might be an admission of guilt.

“Anti-Hero” is welcomed when listening to pop radio. I get clowned on for it from the band, but I love this song. Plus the yellow LP cover with the Wurlitzer? C’mon.

Stereolab – Pulse of the Early Brain

It’s a comp of older songs but a good addition to the catalog. Saw them live this Fall and it was one of the best crowd / band exchanges I’ve seen in a while. Love this band.

It’s not on an album, but def worth a mention. One of my fave songs of the year. Love the tambourine in Dazy’s songs.

Wallows – Tell Me That It’s Over

Maybe I should be more ashamed of this being my top pick, but these guys hit all my spots. The production is awesome, songs are catchy, and the dude was in Scream 5 with bleached tips. Feels like Foster The People covering Vampire Weekend songs. Their music videos are always fun too.

This was the album I listened to the most this year. It feels like all the things I loved in high school melded into one quick-hitting debut record from some fresh-faced Connecticut boys. Try not to yell along, I dare you!

My homie Declan put me on to this late in the year, but it’s all I’ve been listening to since I heard it. Perfect road trip music with fuzzy slacker vibes. This album gives me a silly feeling in my tummy like when I would pop on my walkmen during the bus ride home in elementary school.

This is everything you loved about BritPop put to 2 minute long fuzzy power pop bangers. Love the aesthetic!  From genre choices, the packaging/logo, the music videos, the tambourine being way too hot in the mix – all of it is pure perfection!

This album isn’t nearly as polished or poppy as their last record, but knowing it’s just the buttered-up pre-pro demos he did with their late guitarist before his passing gives it a ton of extra weight. This band can get anything stuck in your head.

The guitar tones and pedal choices are so damn good! These guys got me back into the ignorant shit with their last album, so I’m here for anything to come. Patrick has a loving and comical way of describing the most mundane things.

Maggie hit her stride! This album is immaculate. Great production, beautiful vocals, telling lyrics, all the right bells and whistles. She’s going to be around for a long while – Good call, Pharrell!

This album took me by surprise. I only knew some loose Saba singles from popping up on trendy Spotify playlists, but this album gave me everything I wanted from Kendrick this year. Features are fantastic and the content is dense.

I can’t pretend this is as good as his previous album, but Bartees is still doing an excellent job at bridging gaps between genres or production choices that shouldn’t work so well. An indie darling for this generation.

Vince found a new lil pocket to poke around in and I’m here for it. Loved the chiller vibe of the album. Not one song even hits 4 minutes, but he packs them each full of brutally honest and deadpan retellings of past loves and trauma.

I mean obviously. That’s all.

Lady Wray – Piece of Me

I’ve been on a Lady Wray kick for a few years now ever since I first heard Piece of Me. And this album just adds to it. Perfect mix of that retro Soul sound with late 90s R&B.

Well, clearly I have a type and we’re just gonna keep going with it. Son Little’s new album also fills up that cup that I can’t get enough of the retro soul sounds, but with a twist. This one has a good mix of synths that add a different dimension that isn’t really expected. Deeper is probably my favorite track on the album. So many layers of sound in one juicy slow jam, highly recommended. Pack a bowl and listen to it for a true immersive experience.

If cozy rainy Sunday mornings had a soundtrack, it would be this. Grab a cup of tea, watch the world move slowly by and turn on the sweet sounds of Renee Maskin.

Yawn Mower – To Each Their Own Coat

Is this choice biased? Perhaps. But do I genuinely really love this album even if I wasn’t a part of it? Absolutely. 100/100 would recommend it for all ears.

Saw them at Sea.Hear.Now. My mind exploded. Haven’t been the same ever since.

The Smile – A Light for Attracting Attention

As a huge Radiohead fan, it’s fairly obvious this would take the top spot – the production immediately grabbed me, specifically in the drum tones and vocal effects.

I had never listened to this…band? Collab? Before this year when a bandmate of mine suggested it was perfect for a long, late night drive. Immediately earned its place as one of my go-to’s for that very vibe.

Broken Bells – Into the Blue

Broken Bells have always been a band I forget about and then rediscover. Danger Mouse is one of my favorite producers (he’s even found himself on this list twice!), and James Mercer doesn’t write bad songs. The two together create tasty sonic treats, and this is definitely one of them.

Band of Horses – Things Are Great

I am a sarcastic guy that thrives off of trippy guitar tones and sometimes being sad. This album is a nearly perfect example of that.

When Alt-J broke back in 2012/2013 I was quick to say they were the best band around, or at least, the most interesting. I still feel this way to some degree, and that is largely owed to their propensity for minimalism while not holding back. It’s a high, yet contained, energy.

Not much to say about Bjork that people don’t already know. You either vibe with her or you don’t. The lyrics on this one, as usual with Bjork, are really what got me.

Big Jazz guy, big fusion guy. One of my favorite bands in this realm and they always rip it, especially live.

Been a minute since I listened to Bloc Party. They were huge for me as a teenager. This album feels like it makes sense in their trajectory, but it makes me want to re visit their older stuff.

The Melvins are one of very few heavier leaning bands that I listen to on the reg. They have an attitude (and a loudness) that just always have spoken to me. This record is good for anyone who can handle long songs.

Alex G – God Save The Animals

Classically good songwriting and studio fuckery weirdness. Love to see all the ways Alex blows up his sound with every new release.

Archers of Loaf – Reason In Decline

America’s greatest rock band returns 25 years after their last record with a gigantic middle finger to the rise of fascism, Trumpism, capitalism, and every other awful ism but with a spark of hope for what’s left of our dying, decaying democracy.

A nightmarish, harrowing record that sets a mood with its strange, mutating soundscapes, disorienting and softening the brain for billy’s blunt force delivery to punch a hole through. Every listen reveals new details.

Black Country, New Road – Ants From Up There

Impeccably arranged, orchestral rock epics fleshed out with novelistic verbosity. Simultaneously some of the most singular, funny and heartbreaking lyrics and vocal performances I’ve heard in ages.

Brook Pridemore – Glad To Be Alive

No one writes like Brook. They somehow hit at something universally true and deep with the simplest of phrases and knock you on your ass in the process. Listen. You’ll see life differently.

There is no better lyricist in the game as far as I’m concerned. Layers upon layers to uncover, ponder, and sink your teeth into. His insights are a gift.

Pop music for those that don’t care for the pop image. Grace delivers the goods with zero pretension, all in service of the bangers. Long live Janky Star.

A taught and emotionally raw record that runs into your room, screams, spills its guts out and leaves before you even know what happened. In an era of album bloat, it’s refreshing to be so moved in under 30 minutes.

I’m a Maggie fan now. Fire production from Kid Harpoon sets the stage for some of my favorite vocal performances all year. I mean listen to “Shatter” and tell me she hasn’t lost her goddamn mind in the most impressive way. Song of the year. My record of the year.

Modern Chemistry – my battery is low and it’s getting dark

The mod chem boys stretch out a wide canvas for themselves. The songs feel far bigger than their modest runtimes, taking you on a cinematic, sonic journey that only gets better on headphones.

There’s a lived-in quality to Jules’ writing, where every detail is so specific and authentic that it couldn’t have come from anywhere but real life. Some of the most quietly devastating storytelling delivered with a voice that’ll swiftly make you question your own. Mount Misery is an all-timer.

Facing your demons is a lifelong struggle, but rarely does it feel this therapeutic to yell about. The guitars are noisy and the emotions are messy, but the transcendence is communal. It’s lighter when we all help carry.