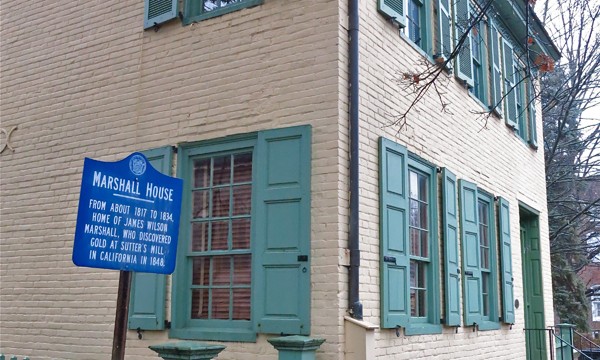 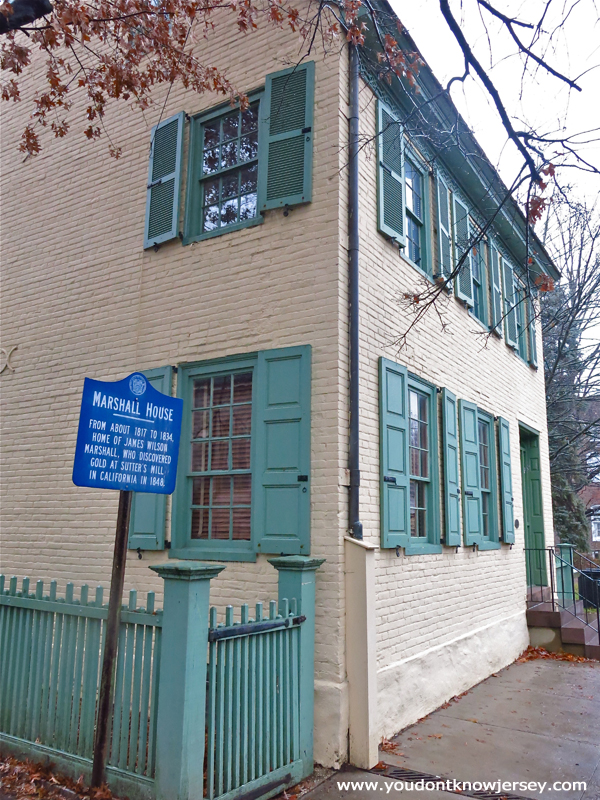 The Lambertville Historical Society is located on Bridge Street right in downtown Lambertville.  Their building also happens to be the childhood home of one of their most famous sons—James Wilson Marshall who discovered gold at Sutter’s Mill and started the California gold rush!

James Marshall was born on October 8, 1810 in Hopewell Township and when he was six the family moved to Lambertville where his father built the home pictured above. James left New Jersey in 1834 and headed west, as many men in that time period did. Opportunities for young able-bodied men seemed to abound in the great plains and mountains of the west back then.  After making his way to Missouri, he contracted malaria and headed farther west on the advice of his doctor who thought that the dry area would help him.  He came upon Sutter’s Fort in California where he was hired as a carpenter. The Mexican-American War began shortly after he began farming his own land near the fort and his land and livestock were stolen or lost during the war.  So, Marshall entered into a partnership with Sutter for the construction of a sawmill. He decided upon Coloma, located roughly 40 miles upstream of Sutter’s Fort on the American River.

Several months into the construction of the sawmill, it was discovered that the tailrace portion of the mill (the ditch that drained water away from the waterwheel) was too narrow. Marshall decided to use the natural force of the river to excavate and enlarge the tailrace. This could only be done at night, so as not to endanger the lives of the men working on the mill during the day. Every morning Marshall examined the results of the previous night’s excavation.

On the morning of January 24, 1848 Marshall was examining the channel below the mill when he noticed some shiny flecks in the channel bed. The metal was confirmed to be gold after members of Marshall’s crew performed tests on the metal—boiling it in a lye solution and hammering it to test its malleability. Marshall, still primarily concerned with the completion of the sawmill, permitted his crew to search for gold during their free time. By the time Marshall returned to Sutter’s Fort, four days later, the war had ended and California was about to become an American possession. Marshall shared his discovery with Sutter.

News of the discovery soon reached around the world. The immediate impact for Marshall was negative. His sawmill failed when all the able-bodied men in the area abandoned everything to search for gold. Before long, arriving hordes of prospectors forced him off his land.

Marshall soon left the area and and found some success in the 1860s with a vineyard he started. He later tried mining again but never succeeded.  He died penniless in California on August 10, 1885.